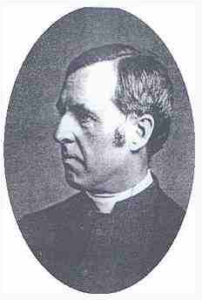 Born at Fareham, Hampshire, 11th August 1825, was third son of George Mackonochie, a retired colonel in the army. He was educated at schools at Bath and Exeter, and attended lectures, at Edinburgh University for a short time. He was ordained in Lent 1849, and became curate at Westbury, Wiltshire. In October 1852 he obtained a curacy at Wantage, Berkshire. In 1862 he became curate-in-charge of St. Alban’s, Holborn, which was then being built by John George Hubbard on a site given by Lord Leigh.

The church was consecrated 21st February 1863. Mackonochie had by this time adopted advanced views as to ritual, and from the first had difficulties at St. Alban’s. Before he was appointed a strong protest was made by a neighbouring clergyman, and as he gradually added to the ceremonies, he was subjected

to a long series of lawsuits promoted by the Church Association. Lord Shaftesbury, who visited St. Alban’s in 1866, made a note on the service in his diary, ‘In outward form and ritual it is the worship of Jupiter or Juno;’ others regarded Mackonochie as a Jesuit in disguise. In 1865 Mackonochie had become chaplain to the sisterhood of Haggerston. More lawsuits followed in light of his way of preaching.

In December 1887, being in weak health, he went on a visit to the Bishop of Argyll and the Isles at Ballachulish, he went out for a walk over the hills, Mackonochie was found dead on the 17th December 1887, in the deer forest of Manore, twenty miles from Ballachulish. His funeral service took place at St Alban’s and was well attended. In 1890 a chapel at St Alban’s was dedicated to his memory. 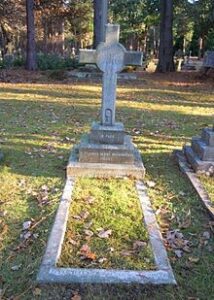