DESCRIPTION: the memorial comprises a tall neo-Grec stele. Over a rectangular base with inscription is a relief, designed by Evelyn de Morgan, showing an angel with outstretched arms, pleading with a female figure of Death, with inverted torch, who turns her back. Above is an eared pediment, within which is a pair of hearts. The inscription described William as ‘Artist – Potter – Inventor – Novelist’ and closes ‘Sorrow is only of the earth / The life of the spirit is joy’.

HISTORY: William is celebrated as a Chelsea-based potter who resurrected the art of lusterware and was much influenced by Middle eastern design; he later worked with William Morris and had a factory in Fulham. His wife was a figural painter, strongly influenced (like Burne-Jones) by the C15 Florentine painters: this influence is also sensed in this memorial, which is a late example of such ‘Pe-Raphaelite twilight’ works. One of a number of memorials at Brookwood to prominent artists of their day. 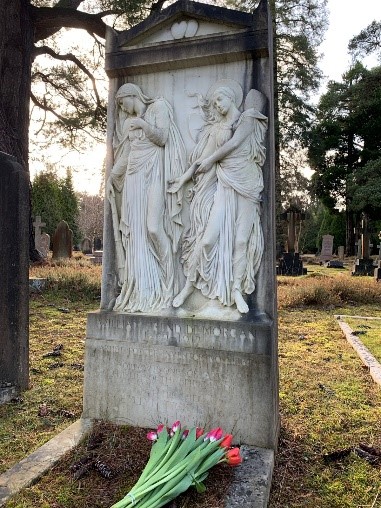