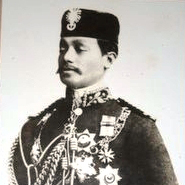 Abdul Rahman Andak (Dato Amar DiRaja Abdul Rahman Andak), was a champion of Johor’s independence during the period when the British were trying to extend their influence throughout Malaysia. A commoner, he was recruited into the Johor civil service.

Abdul Rahman Andak helped draft the Anglo-Johor Treaty with the British Governor, Sir Frederick Weld. Under this treaty the British recognised Abu Bakar as Sultan of Johor, and it became a protection for Johor against further British colonial designs. He was bestowed the title “Dato Amar DiRaja”.

Abdul Rahman Andak became the private secretary to the Sultan, and was later appointed State Secretary of Johor. For twenty years he was the expert and trusted advisor to Sultan Abu Bakar (1833-1895, Sultan of Johor 1862-1895); and Sultan Ibrahim (1873-1959, Sultan of Johor 1895-1959) for their dealings with the British in Singapore and in London. Abdul Rahman Andak also single-handedly drafted the Johor Constitution, the first created amongst the Malay States, which became law in 1894.

In retaliation, the British tried to prevent the government of Johor receiving advice and direction from its advisory board in London, they tried to construct a railway line across Johor, and they tried to engineer Abdul Rahman Andak’s resignation. In the end they succeeded in the latter, for he was dismissed and sent into enforced exile in London in April 1909.

In addition to his political legacy, Abdul Rahman Andak was the founder of the Pakatan Belajar Mengajar Pengetahuan Bahasa, a literary society. It later became the Royal Society of Malay Literature of Johor. Abdul Rahman Andak widened the use of the Malay language and made it the official language of the government.

Abdul Rahman Andak married twice. First Che’ Lembek, who died in 1885. He later married Auguste (Gustel) Reis (died 1933), and they had three children. Gustel is buried with him at Brookwood, in the old Muslim burial ground.

The following links give further information about Abdul Rahman Andak: