Pair of Memorials to members of the Vickers family, set within a stone kerb. c 1928 and 1937. Portland stone.

DESCRIPTION: the earlier commemorates Oliver Vickers (d.1928). It comprises a squat base with fielded inscription panel, over which is the motto of the RAF, PER ARDUA AD ASTRA. Above this perches an eagle, with outstretched wings. The sides of the memorial are inscribed with the words SERVICE – KINDNESS and COURAGE – ENDURANCE.

The later memorial, to Douglas Vickers (d.1937) consists of a rectangular chest tomb in the style of Sir Edwin Lutyens, with a heraldic cartouche at the ends, and circular discs on each of the corner panels.

HISTORY: both monuments are of historic and visual interest. Capt. Oliver Vickers was an early Royal Flying Corps ace: hence his very distinctive aviation-themed memorial. His father was the founder of the noted aviation company Vickers, which was based at nearby Weybridge. His wife, the Hon Katherine Vickers, is also buried here. The monument, with its blue painted lettering, is very similar to designs from the office of Lutyens but is not mentioned in lists of his works. 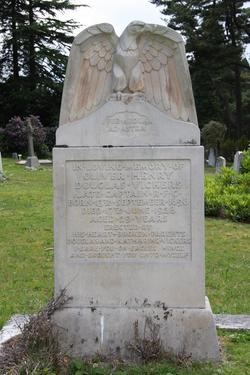