Sculptor unknown. Bronze figural group on a base of Portland stone, set within a kerb of Portland stone. The group comprises a recumbent, semi-draped dead woman, mourned by a kneeling weeping figure; above hovers an angel with outstretched arms and wings. The base, which has lost its inscription panels, is Georgian in inspiration with angle-set balusters to the corners beneath a continuous frieze. The kerb has twelve tapering blocks formerly linked with chains.

HISTORY: Pelham-Clinton (1836-1907) was the son of the fifth Duke of Newcastle, and rose to become Master of Queen Victoria’s Household in 1894-1901; he lived close by, at The Heights, Witley, Surrey. The prominence of the female body indicates this monument was erected to his wife. This is an exceptionally good Neo-Baroque bronze monument, displaying virtuoso bronze casting. Stylistically it recalls the work of Princess Louise, Victoria’s sculpting daughter: Pelham-Clinton’s role in the Royal Household makes this a possibility, although this suggestion needs more research before a firm attribution can be made. 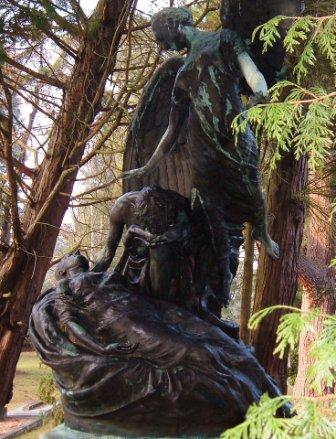