DESCRIPTION: the memorial comprises a large enclosure, set within elaborate railings with a quatrefoil repeat. In the centre is a moulded sarcophagus in the C15 Florentine style, with urn and festoon decoration to the sides and inscription plaques on the top. Behind this, set between yew trees, is a tall pedimented aedicule. Its lower panel, pilaster capitals, frieze and tympanum are all enriched with bronze: the frieze is decorated with peacocks, butterflies, and garlands, while the pediment sports a relief of Apolllo in his chariot. Set between fluted Corinthian pilasters of Siena marble is a bas-relief group, consisting of a pair of naked putti with inverted torches, emblems of death, on either side of a parade shield; above is a profile portrait of the young Henry Freshfield, who wears an Eton collar.

HISTORY: also, to Freshfield’s parents, Augusta (d.1911) and Douglas (d.1934): he was an eminent barrister, mountaineer, and travel writer. This is an outstanding late Victorian memorial by the eminent sculptor Edward Onslow Ford, a prominent practitioner of the New Sculpture. This memorial, one of the most lavish in the cemetery, is an outstanding example of late Victorian Renaissance Revival design and is of high sculptural quality. 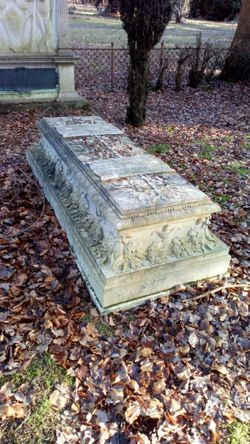