Carrara bust within a pink granite surround. Mason unknown. Leitner’s bewhiskered bust is set within a curved niche: around it, in raised letters, is the inscription THE LEARNED ARE HONOURED IN THEIR WORK.

HISTORY: Leitner, born in Budapest, was a modern linguist specialising in oriental languages. Sometime professor at King’s College London, he founded numerous establishments of learning in the Indian sub-continent, including Lahore University. He founded the Oriental Institute at Woking as a place of learning these languages for colonial administrators: as a result, Britain’s first mosque was opened in Woking. Listed for its sculptural exuberance and as an interesting reflection of late imperial cosmopolitanism. 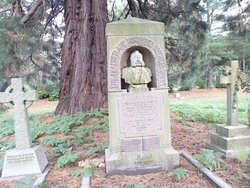