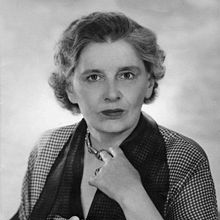 Born Cicily Fairfield, she began writing for The Freewoman under the pseudonym “Rebecca West”. Her book ‘Henry James’ (published 1916) established her literary reputation. When she was 21, she began a liaison with H. G. Wells with whom she had a son (Anthony West). In 1930 Rebecca married the banker Henry Andrews. Rebecca was made CBE in 1949 and DBE in 1959. She was a witness for the defence in 1960, in the D H Lawrence case about his book Lady Chatterley’s Lover. After her husband had died, she bought an apartment overlooking Hyde Park, which was next to the Iranian Embassy and in May 1980 during the Iranian Embassy siege, she was one of the residents that had to be evacuated from her home. She was a lady with strong political views, a supporter of the suffragettes, and found herself on Hitler’s blacklist. In her time, she wrote many fictional and non-fictional novels.