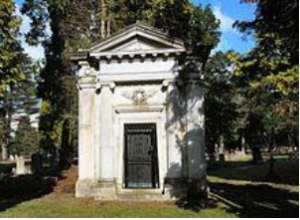 Within this Mausoleum lie Sir Samuel Bagster Boulton (1830-1918), an industrialist. He was chairman of Burt, Boulton and Haywood Ltd.  Boulton was also chairman of the Dominion Tar and Chemical Company, of the British-Australian Timber Company, and of the London Labour Conciliation and Arbitration Board 1899-1913.  The Mausoleum was built for his wife Sophia Louisa Boulton 1836-1900.  His son, Sir Harold Boulton 1859-1935, was an industrialist and lyricist.  He was director of his father’s firm and of the Baths Club Ltd.  Boulton published many volumes of songs and lyrics including the Skye Boat Song and Glorious Devon.  Boulton was the secretary of the Keats-Shelly Memorial Association 1906-1926 and was founder and chairman of the people’s palace in Mile End Road and of the East London Horticultural Society.  Boulton was also founder and president of the Federation of Working Men’s Social Clubs 1895-1930 and director of the Royal Academy of Music 1931.

Sir George Kendall Bushe Power, 7th Baronet of Kilfane 1846-1928 was a tenor.  He was a professor of voice production and singing and sang in Malta and Italy.  Power was the original Ralph Rackstraw in HMS Pinafore at the Opera Comique 1878 and the original Frederic in the Pirates of Penzance at the Opera Comique 1880.  He married Sir Samuel Boulton’s daughter Eva Gertrude in 1915.

This Neoclassical style Mausoleum is built within a plot 60ft by 36ft.  Constructed from white marble, the architect unknown, it features attached Ionic columns either side of the entrance which supports a pediment framed by the gable above.  The doorway has an Egyptian influence, and the bronze door depicts Christ as the Good Shepherd.