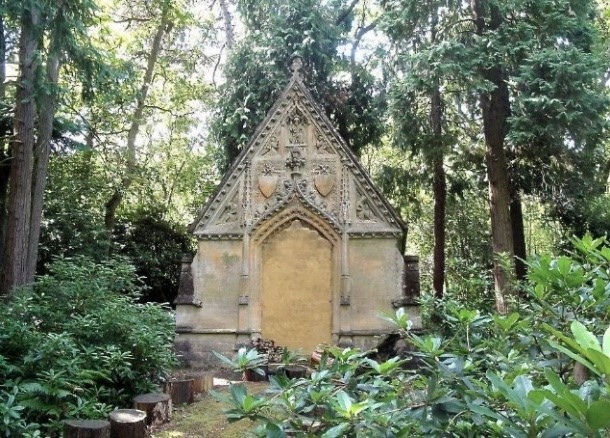 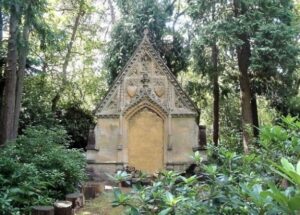 A lost Victorian chapel, discovered in the undergrowth at Brookwood Cemetery, has been fully restored by Woking Borough Council. The exquisitely sculpted, Gothic style chapel, built almost entirely from Bath stone, has been sympathetically restored over the past five months using original materials and specialists’ tradespeople.

Built in 1858, the cemetery chapel was adopted by the Colquhoun’s as their family mausoleum. It was restored in 1924 by Violette Freeman in memory of Eliza Colquhoun Redhouse but subsequently left to disappear behind a thick wall of shrubs and rhododendrons.

The council acquired Brookwood Cemetery in 2014 but the chapel remained cocooned in the dense undergrowth for a further two years.

“Brookwood Cemetery is the largest cemetery in the country and of great historical value. When the council bought the 220 acre site in 2014, it was with a view to restoring this Grade 1 listed park and garden to its former glory. “It was through reviewing historical images of the cemetery that we learnt of the existence of the chapel and set about trying to locate it.”

After a concerted effort, the chapel was found in the back woods, in a poor state of repair. The entrance had been crudely blocked up, the floor of the crypt had fallen in and the wrought iron perimeter fencing had either collapsed or rotted. Nonetheless, the chapel’s beauty and character was still evident. 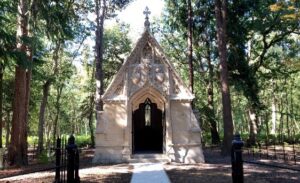 With support from a specialist conservation surveyor and building company, restoration work started in April 2019. Ten coffins were removed from the chapel and placed in storage while the crypt was rebuilt. Major repairs were made to the roof which included replacing the finials and other decorative features that were carved on site by experienced stonemasons. Internally the chapel was re-plastered, and all the iron fixtures and railings were restored in wrought iron by a blacksmith. The stonework and marble cladding was cleaned, and pathways built to give access to the chapel.

“In four years, we have transformed the cemetery and hope to restore many of the memorials and structures on site. Colquhoun Chapel is among the first because it is one of the more beautiful buildings in the cemetery, and one of the oldest. What makes it even more special is the fact that it was a lost building, that hadn’t been seen by anyone for a number of years. There’s a wealth of history within the cemetery walls, which we’re trying to make people more aware of while at the same time, making this fantastic space more accessible to the public.”

Brookwood Cemetery was founded in 1852 to house London’s dead and was uniquely serviced by its own railway. In the early 20th Century, part of the site was sold to the Commonwealth War Graves Commission to accommodate the graves of the Commonwealth victims of the First World War. A separate area was also allocated to the American Battle Monuments Commission for American victims.

Twelve Victoria Cross recipients rest within the confines of the cemetery and a further three are commemorated on site.

“Decades of neglect earned Brookwood Cemetery a place on Historic England’s ‘At Risk Register’ but since acquiring the site we’ve been working to turn that around. “The restoration of Colquhoun Chapel is exciting because it shows what can be achieved and it is now a shining example of the rich history and architectural wonders within the cemetery.

“Brookwood was one of the premier cemeteries in the country and has the potential to be a jewel in Woking’s crown. It’s an important part of our story so it’s down to us to help people understand its value and look after it for future generations.