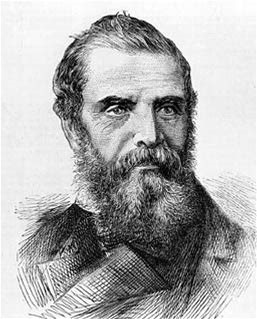 Richard Ansdell was a British painter of animals and genre scenes. Ansdell was born on 11 May 1815 in Liverpool (then in Lancashire), the son of Thomas Griffiths Ansdell, a ships’ pulley block maker at Liverpool docks and Anne Jackson. His father died young and Richard was briefly educated at The Liverpool Blue Coat school for orphans. He had a natural talent for art from an early age, and after leaving school worked as an apprentice to a silhouette painter in Chatham in Kent, and also spent time as a sign writer with a travelling circus in the Netherlands.

He first exhibited at the Liverpool Academy in 1835, becoming the President in 1845.  His animal and sporting subjects proved to be popular and he soon attracted wealthy patrons. His first exhibition at the Royal Academy, London, was in 1840, with two paintings called “Grouse Shooting” and “A Galloway Farm”. (this painting was bought by the Marquis of Bute and can still be seen at Mount Stewart on the Isle of Bute) This was followed, in 1841 by “The Earl of Sefton and Party Returning from Hunting”, in 1842 “The Death of Sir William Lambton at the Battle of Marston Moor“, (Harris Museum, Preston) in 1843 “The Death” and in 1844 “Mary Queen of Scots returning from the Chase to Stirling Castle”. He went on to exhibit pictures every year at the Academy until 1885 (149 canvases in all). In 1846 he exhibited his first picture, “A Drover’s Halt” at the British Institution, London, and went on to show 30 canvases there.

In June 1841, he married Maria Romer – the couple went on to have 11 children. In 1847 the family left Lancashire to live in Kensington in London.  They also had a house called Collingwood Tower at Farnborough and a large Scottish lodge (Moy Lodge) on the banks of Loch Laggan.

In 1850, Ansdell sometimes collaborated on pictures with Thomas Creswick RA, who specialised in landscapes (e.g.: “The South Downs”, “England’s Day in the Country” etc.). He also worked with William Powell Frith RA (“The Keeper’s Daughter”) and John Phillip RA, with whom he travelled to Spain in 1856 and painted a series of Spanish subjects – “The Water Carrier”, “The Road to Seville”, (Fylde Borough Council’s Art Collection) “The Spanish Shepherd” etc. He returned to Spain alone the following year to paint more pictures there.

He was also known for his magnificent and large depictions of important gatherings, depicting each person in the crowd individually.  “The Country Meet of the Royal Agricultural Society” (Royal Agricultural Society, Stoneleigh, Warwickshire) and “The Waterloo Cup” (Walker Art Gallery, Liverpool) to name a couple.  One of his masterpieces “The Fight for the Standard at the Battle of Waterloo” can be seen today in The Great Hall of Edinburgh Castle.

In 1855, Andsell was awarded a gold medal at the Paris Exhibition for his works, “The Wolf Slayer” and “Turning the Drove”. He also won the “Heywood Medal” three times for his work at the Manchester Royal Institution. He was elected an Associate of the Royal Academy (ARA) in 1861 and a Royal Academician (RA) in 1870.

His first family home was at Lytham St Anne’s, in the borough of Fylde, where a district, “Ansdell”, is named after him. He is the only English artist to have been honoured in this way.

Ansdell died at “Collingwood Tower” at Farnborough in Hampshire on 20 April 1885.  He was buried at Brookwood Cemetery Grave No 98363 Plot 30 together with his wife, Maria and two of their children – Harry Blair Ansdell and Rosalie Leech.  Rosalie Leech is also buried with her husband William Leech and their son, Guy Ansdell Leech.  William Leech was a Lancashire mill owner – his mill was featured in Mary Gaskell’s “North and South” (Mary Gaskell was a family friend).  William Leech was a relative to Beatrix Potter. 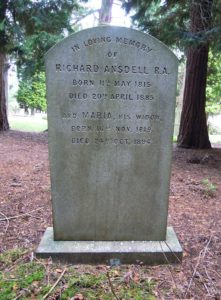