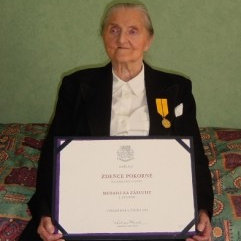 Zdenka Pokorna was a Czechoslovakian teacher and an unswerving patriot. She was hailed on her 90th birthday as the “living conscience of the century” by the Czechoslovakian Government.

She challenged the Habsburg, Nazi and Soviet occupations of her homeland and was forced into exile in 1948. She spent the rest of her long life in Britain from where she continued her campaigning.

Her obituary from The Times may be read here.

The ashes of Zdenka Pokorna were buried in the Czechoslovakian “annexe” of Brookwood Cemetery on Sunday 28 October 2007.