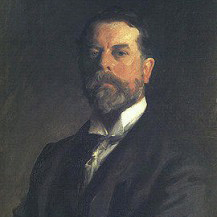 John Singer Sargent is one of several famous artists buried at Brookwood who have an entry in the Dictionary of National Biography. An American artist, who spent most of his life in London. Sargent began his training in Paris and exhibited there from 1877. He moved to England in 1884 and his early years in this country show his “impressionistic” style.

A self portrait of John Singer Sargent is shown in the image to the left.

From the late 1880s he established himself as a portrait painter, and has been described as the most fashionable portrait artist since Sir Thomas Lawrence. In the early 1900s he tired of “paughtraiture” and concentrated on landscapes, charcoal sketches, watercolors, and the decoration of the Boston Public Library.

He served briefly as an official war artist in 1918.

Portland stone. An upright grave-marker, based on an Attic stele, inscribed at top ‘LABORARE EST HONORARE’, and at the foot ‘HE GIVETH HIS BELOVED SLEEP’.

The following links give further information about John Singer Sargent: