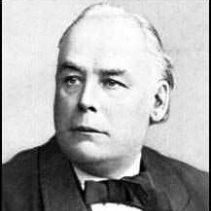 Charles Bradlaugh was one of the most controversial public figures of the late nineteenth century. He is one of several famous people buried at Brookwood who have an entry in the Dictionary of National Biography.

He championed unpopular causes like birth control, republicanism, atheism, reform, peace and anti-imperialism. His views placed him in conflict with powerful interests, institutions and people, but most of his arguments have since been vindicated.
In 1876 he established the Freethought Publishing Company and released an edition of Charles Knowlton’s pamphlet The Fruits of Philosophy, a work advocating birth control. Bradlaugh, with Annie Besant, was convicted for publishing an obscene publication but in 1878 the case was dismissed on a technicality.

Charles Bradlaugh is shown (in the image on the left) being evicted from the House of Commons in 1880 after his first attempt to take his seat as the elected representative for Northampton.

Between 1880 and 1886 Bradlaugh fought for the right to sit in the House of Commons, and he became the first atheist to become an MP.

Charles Bradlaugh was MP for Northampton between 1880-1891, although he was only permitted to take his seat in the House of Commons from January 1886. He was unofficially known as the MP for India due to his sympathetic support for Indian self-government.

His Act of 1888 established the legal right to affirm the Parliamentary oath rather than swearing the oath on a bible.

Charles Bradlaugh is buried in a large family grave in plot 108.

The memorial used to include a fine bronze bust by the sculptor Francis Verheyden, but this was stolen some years ago. The pedestal also included a bronze wreath but this has also been stolen from the memorial. The image to the left shows the incomplete memorial to Charles Bradlaugh as it is today.

The following links give further information about Charles Bradlaugh: