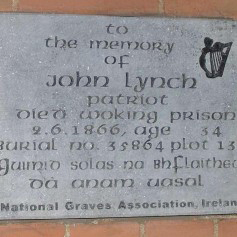 John Lynch was a widower and publican who lodged in Cork City and became involved with the Cork City Fenians. He was convicted on the word of an informer, John Warner, who stated that Lynch was a colonel in the Fenian organisation in Cork. Lynch was convicted of treason and felony by Judge Keogh in December 1865. Overall the evidence used to convict Lynch was rather weak for the sentence of 10 years penal servitude.

Lynch was sent first to Pentonville Prison. Later in December 1865, due to a chest infection, he was moved to the hospital in Woking Prison. Other inmates at Woking included Jeremiah O’Donovan Rossa, Captain Richard O’Sullivan Burke (retired from the US army), Captain Timothy Deasy (of the 9th Massachusetts Infantry Volunteers), Brian Dillon (a law clerk from Cork), and Charles Kickham (author of the popular novel Knocknagow).

Evidence of Lynch’s imprisonment at Woking comes via a number of letters smuggled out of the prison that were subsequently published by Jenny Marx in the French newspaper La Marseillaise under the pseudonym “J. Williams”. Lynch succumbed to the regime of Woking Prison and died there on 2 June 1866.

He was subsequently buried in the Roman Catholic pauper section of Brookwood Cemetery on 6 June. The precise location of this area and his grave are unknown, but it is somewhere in the woodland beyond plot 134. In memory, a stone plaque memorial is sited on the chapel wall – Plot 124

The National Graves Association of Ireland commissioned a stone plaque which was fixed to the wall of the former Catholic chapel in 2004. Prior to this, Lynch’s only other memorial was on the National Monument on the Grand Parade in Cork City. The monument commemorates all Irish patriots who died during the period 1798-1867.